Our onsite critter cabin has seen through its first winter so I thought we could go through and decide if it is just a trendy piece of junk placed together in an aesthetically pleasing manner which would have provided more use on the fire or if it was actually something which was utilized by our backyard friends and more so benefited our backyard friends!

To see how I built this Chitin Chateau and how you can build one, check out Insect Hotels for Deft and Dangerous.

Personally I am quite surprised that anything decided to take up residents as every 4-6 weeks the Foreman would pull it apart, or maybe that made the stay more enjoyable as there was a consistently rotating view, I dunno.

We had a few species frequent the rooms and it was quite an interesting experiment to watch the coming and goings throughout the past few months. The 4.5mm holes where predominantly taken up residents by ants and spiders. Both of which offered quite an interesting insight into the lives of the species, the ants in particular where fascinating as they created their various rooms. They are very methodological in their approach and place their feeding and egg chambers in an efficient layout while maintaining a safe position constantly rearranging as the light and temperature changes.

The 10mm holes where filled with the species we were trying to attract! Of the 25 10mm holes we placed into the Chitin Chateau, 14 were overwintered in. We were lucky enough to have boarders from both the Bee and Wasp families, which were the two main species we wanted to attract. The Mud Dauber and Potter Wasp were the prominent wasp species that interacted with the Bug Hotel, I unfortunately didn’t get to capture the hatching but it was a delight to watch the adult building the nests. Both the Mud Dauber and the Potter Wasp are quite common in the backyards of Brisbane and are a valuable asset for the backyard grower. Both are a solitary wasp, which mitigates the stinging swarm which chases you upon being disturbed, the Mud Dauber prey on spiders (1) while the Potter Wasp prey primarily on caterpillars which they place inside cells in their nests for the growing young (2).  We attracted 2 bee species, the first of which I thought was a Mason Bee, but it turns out they aren’t prominent within Australia so I am tentatively resting on a type of Resin Bee. The second (which at the beginning I mistook for a very strangely shaped fly) appeared to be the Domino Cuckoo Bee. This was quite a phenomenal sighting for me as I haven’t knowingly come across either these species before! The domino cuckoo bee is a parasitic bee who lays its eggs within the chambers of other bee species such as the Carpenter Bee and the Teddy Bear Bee where the Cuckoo larvae hatches earlier than the resident bee and eats all the food provisions before the resident bee can hatch (3).

So all in all, I think quite a success and will be putting this under the Beneficial Building category! I hope you can enjoy some crafting time and build some homely nesting spaces for your backyard friends!

Here is the link so you can build one for your backyard! Check out Insect Hotels for Deft and Dangerous. 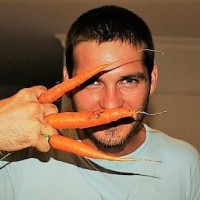 Be a part of nature